So, you’re really serious about DJing. In this article, as well as the following ones, I’ll explain what equipment you’ll need and what you’ll need to pay attention to when choosing it. I’d like to note from the outset that I want these articles to stay relevant for at least a couple of years, so you won’t find any specific products mentioned too often – except for those that have been around for years and will be bought and used well into the future.

Depending on the type of media you’ve chosen to start with, you’ll need the following. 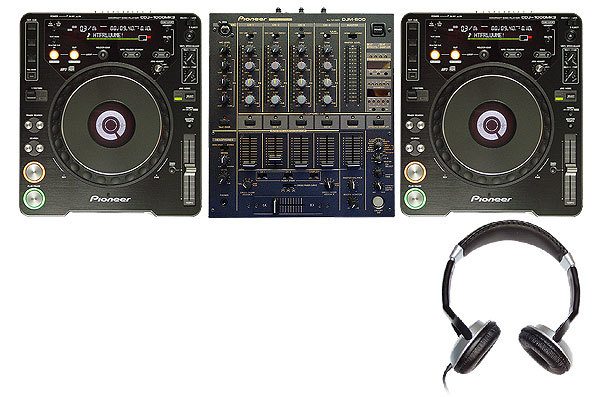 Folks who are new to DJing often ask me: Why does a DJ need two players, be it CD players or vinyl turntables? In short, two decks are needed to make smooth transitions from one song to another without any gaps or changes in the tempo. This process is called “mixing” and is explained in greater detail here.

The necessity of mixing defines one of the key features of a DJ deck. This feature is the pitch control, which is a slider that allows you to change the tempo of a track. In addition to that, professional CD players also differ from consumer grade ones in that they offer the so-called “instant start,” precise search and the ability to save cue points in memory.

If you’ve chosen the good old vinyl, you’ll need to get some slipmats to go along with your decks. A slipmat is a soft felt mat that’s placed between the turntable’s platter and the record. The purpose of the slipmat is to reduce the friction between the record and the platter, which gives you the ability to freely manhandle the former.

In addition to the slipmats, you’ll also have to buy cartridges and needles for your turntables. A cartridge does the actual job of transforming record grooves into sound signal. It’s mounted on a headshell which is in turn attached to the deck’s tone arm. By the way, sometimes cartridges and/or slipmats will come with a turntable, but that’s not always the case. Find out in advance what extras your turntable of choice comes with.

The mixer allows the DJ to mix and otherwise transform the sound coming from the decks. For example, it allows you to send the output from a given turntable (or both of them) to the dancefloor, or listen to one track while the folks on the dancefloor hear another. So whereas the decks serve as the sound source, the mixer is what the DJ routes this sound with.

A DJ needs headphones to preview and prepare a track while something else is playing on the dancefloor. Usually this track is a tune on the other deck that’s going to be played next. DJ headphones are distinct from regular ones in that they offer better ergonomics, sound quality and sound isolation. The latter is particularly important in the club environment.

Note that I haven’t included amplifier and speakers in the equipment lists above. There are reasons to that. First, you can hook up your mixer to your home stereo while you’re learning. Second, you can totally learn how to DJ without using external speakers. For example, I learned DJing while using headphones only. Thus it’s better to save on the amplifier and the speakers and buy better decks and a mixer instead.