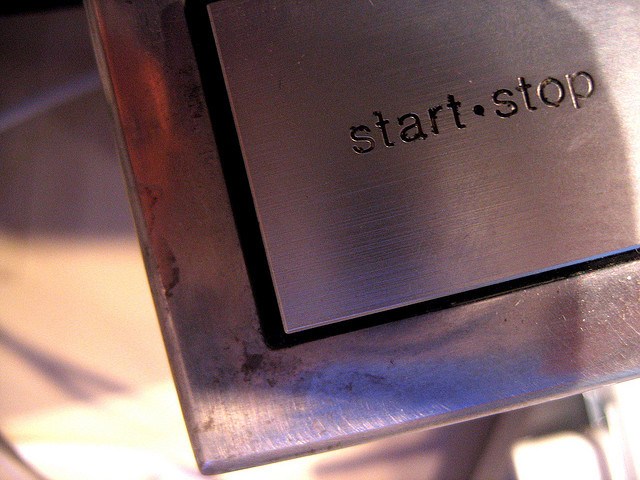 As you know all too well at this point, mixing is a process of making smooth blends between songs. That said, sometimes it’s more fun to forget about the smoothness and add some variety to your transitions. That’s when the spinbacks, power-offs and stops come into play – surely the showier ways to go from one track to another.

Most vinyl turntables have electromagnetic brakes that stop the record more or less instantly after you’ve pressed the Stop button. The resulting sound is not too pretty but it can be used for cutting from one tune to another.

Beatmatch the new track to the one playing on the dancefloor and start it in your headphones as you normally do before making a blend. However, instead of starting to gradually bring in the new track to the floor, wait till the end of a phrase. On the phrase’s very last beat, hit Stop on the outgoing record’s deck and then quickly move the crossfader over to the new track – right in time for the first beat of the next phrase. That way, the old tune will instantly give way to the new one’s intro.

A backspin (also called spinback) is a characteristic effect produced by a record that’s given a quick spin in the reverse direction. It sounds very much like a fast rewind, which it essentially is. Just like a stop, a spinback can be used for making impressive cuts.

Before you try making a transition that involves a spinback, get a hang of giving the record a spin in the reverse direction. As the record is playing, take aim at the 12 o’clock spot on its outer edge. Catch the record at that spot with your middle finger and quickly (so that there’s no pause) push the record counterclockwise.

Warning: Backspins wear out vinyl in no time, so practice with the records you’d otherwise throw away.

There are a few ways to use a spinback in a transition. The first one is very much like using a stop. Instead of stopping the old track, however, you spin it back on the last beat of a phrase. Then, just before the record halts and begins to rotate clockwise, you quickly cut to the new tune by moving the crossfader over. Practice giving the record just enough of a push so the backspin ends within one beat, like here:

The second approach is more like a “normal” blend. You start the new track and begin to bring it in to the floor bit by bit, allowing it to get some momentum. Just before an important change in the new track (start of a bassline, for example), you backspin the old one and fully bring in the new tune, right in time for the banging part. Be creative!

If you turn off a turntable while a record is playing, it won’t stop instantaneously but will gradually grind to a halt. As usual, one sample is worth a thousand words:

You can use power-offs in a number of ways:

Speaking of ending the set, it’s time to conclude the article. Power-offs, spinbacks and stops may bring a lot of diversity into your mixing – but only if you follow two important pieces of advice. The first one is to hold your horses. If every transition you make is done either via a stop or a spinback, the guests will sooner or later come to a conclusion that you simply can’t mix. Second, master those tricks beforehand. They are very impressive but if you do them wrong (or in a wrong moment), you’ll sound very unprofessional.