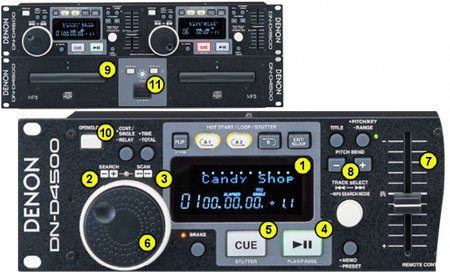 Despite the fact that professional CD players already existed back in the 90s, the club standard – Pioneer CDJ-1000 – emerged only after the deck was introduced in 2001. The long absence of such a standard led to different manufacturers taking different approaches to implementing some of the features in their DJ CD decks. Thus in this article, I will only talk about the common denominator, or “CDJ mode,” which is applicable to most modern DJ players. Details on a particular model can be gathered from its manual and hands-on experimentation.

Take a look at the CD players below. The first one is the Denon DN-D4500 twin CD deck, and the second one is the Pioneer CDJ-100. I have deliberately chosen these older players for this article so as not to distract you with the myriad of extra controls available on newer and more advanced models.

As you can see, there are still a few controls I skipped, and there are even more of them on the CDJ-1000 and other advanced decks. However, the controls listed above are the ones that are used most frequently in real life, and so a good understanding of them is more than enough to succeed in spinning CDs.