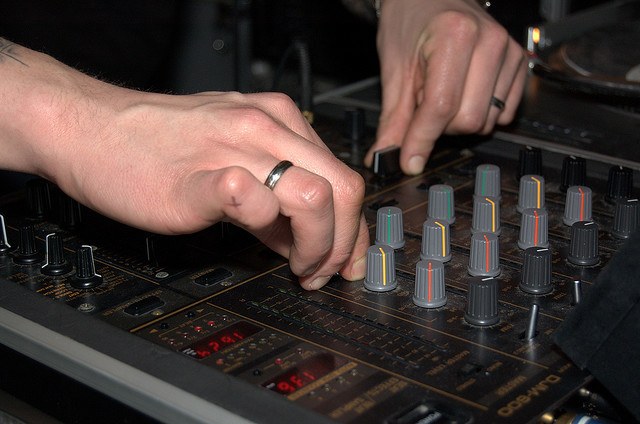 After you’ve mastered mixing in its basic form and learned to match phrases, you’ll already be able to make fairly good transitions between records. To mix like a pro, though, you’ll still need to master one essential skill: using the EQ. In this article, I’ll talk about how you can take advantage of this powerful tool to make your blends totally smooth and subtle.

The Basic Concepts of EQing

Technical details aside, the channel EQs in your mixer allow you to adjust the level of different frequencies (normally highs, mids and lows) in the sound that comes from the decks. And since each of the track’s elements – such as the kick drum or the vocals – often belongs to only one frequency range, the EQ allows you to cut or dampen those elements at will.

The chart below lists the elements of a song and the frequency bands they normally belong to. To actually get a feeling of what I’m talking about here, play around with your mixer’s EQ and take notice of what instruments and elements of the tune the particular knob is responsible for.

The channel EQs of a mixer have separate rotary controls for each of the three main frequencies (see photo). At twelve o’clock, a knob doesn’t alter the level of its frequency range; turning the knob clockwise boosts it and turning the knob counterclockwise lowers it. Some mixers also have Kill buttons (or a special zone in the leftmost position of the knobs), which cut the frequency range completely.

What does it all have to do with mixing? A lot. The thing is that when mixed, the two tracks’ kick drums and hi-hats often clash with each other. As a result, even despite the tracks’ beats being aligned, the transition may still sound messy. To avoid that, the DJ first hides the potentially conflicting elements of the incoming track with the EQs and then, during the blend, replaces the old one’s elements with them.

(By the way, it follows that when mixing, you’ll most often have to deal with the high and low frequency knobs. The mids are adjusted less often, also because during a blend, at least one of the tracks is in its intro or the outro, where there’s normally no melody or vocals. Thus there are no clashes in the mid frequency range.)

Now that I’ve covered the basics, I’m going to tell you how I use the EQ when mixing. Note that the tips below aren’t a standard of some sort; they’re just a starting point for your own experiments.

OK, let’s begin. Before you start bringing track B in, cut its bass almost completely and lower its highs by about two-thirds. Then, as you’re making the transition with the upfaders, adjust the EQs to increase B’s bass while at the same time lowering it in A. Make sure to be doing the same with the highs, too. By the end of the transition, you should end up with the dancefloor hearing track B only, with all three of its EQ knobs at twelve o’clock.

Here are a few other approaches of the same sort to stimulate your creativity:

Bringing in on the highs. Sometimes there’s a melody element in track B’s intro that’s nice to announce right in the beginning of the transition. If that’s the case, you don’t lower B’s highs but as you’re bringing the new track in, you gradually dampen them in A so that the two channels’ highs don’t clash.

Here’s an example from one of my mixes:

The blend begins at 00:07; note how I announce the new track right away with its distinctive tinkling.

Swapping the bass. Instead of gradually increasing B’s lows and lowering them in A, you can add a bit of a dramatic effect to the transition. As both tracks are at about the same volume, slam B’s bass in and at the same time cut it out in A. (Remember that sharp changes like this one can only be made on the first beat of an 8-bar phrase.)

Swapping the hi-hats. Same as the previous trick, except that you do it with the highs.

The EQ allows you to make really smooth and unnoticeable transitions between records. At the same time, a full account of DJ’s actions during a blend may be pretty intimidating. The disc jockey has to work the channel faders, handle the EQs, monitor the sound in their headphones from time to time, as well as track and fix any beat drifting.

The good news is that if you practice, take it slow and don’t give up, you’ll be able to make all these various DJing skills fully automatic. And the day will come when you’ll suddenly realize that you’re able to mix like a pro, effortlessly.