Effects and Tricks to Spice Up Your Set - DJing Tips 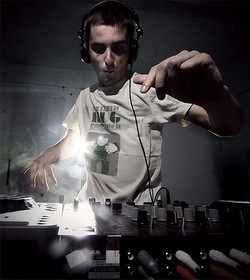 Effects and Tricks to Spice Up Your Set

As your DJ skills improve, you’ll notice that mixing and its related preparations like beatmatching don’t take up that much of your time behind the decks. For the majority of the set, you’ll have to listen to your tracks along with the dancefloor. One way to make yourself busier is to tighten your mixing. Today, however, I’ll tell you how a couple of simple tricks done in the middle of a tune can help you add more showmanship to your sets while also giving the impression that you’re actually working for your money!

Warning: Like everything else in life, tricks and effects are good in moderation. Use them several times in every track and you’ll look like a pathetic newbie trying to impress the crowd. Turn to them only a few times during your set, and do it just in the right moments, and the guests will scream with delight (I mean it – check out the mix in the bottom of this article).

Another rule: When messing with the sound in real time, always wear headphones or turn on the monitors. The sound from the main speakers comes at you with a delay, which could be just enough to ruin the delicate timing of your track manipulations.

The fader allows you to do tricks that are not too diverse but still interesting in their own way. These tricks normally involve closing the fader in a strategic moment or quickly moving it back and forth. Here’s what I mean:

The last beat before the climax. This classic trick is perhaps the oldest in the business. You close the fader on the very last beat of a phrase preceding the track’s climax, and then open it on the first beat of the new one. This allows you to make the long awaited “comeback” even more dramatic. Here is what it sounds like in real life:

After thousands of hours of listening to dance music, you are naturally better at “feeling” the beginning of the phrase than the last beat of the preceding one, on which you have to close the fader. Thus initially you may find it helpful to count beats for a few bars before the climax.

Transform. This is an old-school trick borrowed from scratchers. To do it, move the fader up and down between 100% and about 70% as quickly as possible. This effect sounds best in the parts of the song where there’s no drumbeat:

I do the transform between 00:06 and 00:17 in this sample. By the way, you can control the range of your fader movements with another hand’s finger pressed against the fader strip.

Letting the floor sing along. This trick is inspired by pop singers directing the mic towards the crowd that’s singing along to their song. When you play a track with a familiar vocal hook, you can add some interaction to the process. As the hook begins to play, lower or close the upfader so the guests can hear themselves singing. Of course, the crowd must be large enough in order for the effect to really work. 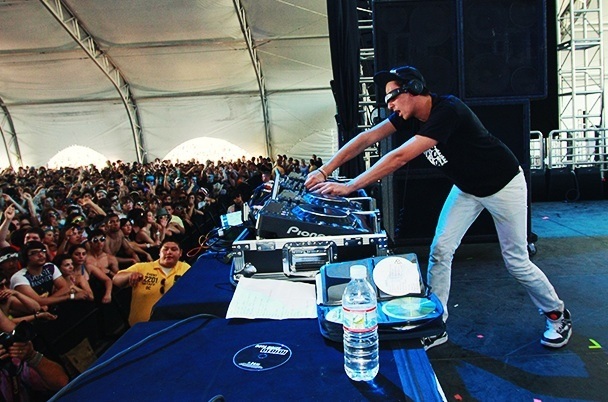 If nothing else, the EQ gives you more creative freedom simply because it allows you to control the sound in three dimensions instead of only one. Here are a few starting points for your further experimentation:

Cutting the lows. The absence of drums and a bassline creates a vacuum on the dancefloor and keeps it in anxious anticipation for their return. Thus you can use the bass knob instead of the channel fader to emphasize the track’s climax by just cutting the bass on the last beat of the preceding phrase. Unlike the fader, though, you can also kill the lows for longer periods of time – for a few bars of the buildup, for instance.

Also, you can play around with the lows to simulate the sing-along effect, when the bass is cut during a catchy hook. This works because the lows contribute the most to the overall volume of the track:

In this sample, “You-u-u” is just such catchy hook.

Boosting the highs. This trick is similar to cutting the mids and bass in that it creates an unsettling, discomforting sound. Pushing the treble works well in conjunction with cutting the lows just before a climax:

In conclusion, check out this awesome live mix by Dimitri From Paris where the DJ makes use of much of the tricks discussed above. A good sport to start listening is at 1:04:00 and on. The crowd is really going insane on this one!

Listen to the mix ›

As you can see, even simple tricks like these can bring some diversity into your set and give it a bit of a special flavor. (Also, exaggerated arm movements when working the EQs and the faders – see photos above – can help you deliver more of a show; just don’t overdo it.) In my future articles, I’ll take it a step further and tell you about the effects that can be produced with FX processors. Stay tuned!