How to Mix Harmonically - DJing Tips 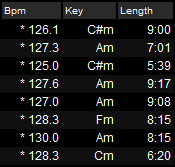 How to Mix Harmonically

After you’ve keyed your records, the real fun begins. In order to mix harmonically, you need to make sure that the incoming track’s key is compatible with that of the outgoing one. There are certain rules as to what keys go well with each other, but, fortunately, you don’t need to be a conservatory graduate to take advantage of them.

The Camelot wheel, invented by Mark Davis from the Harmonic-Mixing.com website, makes finding compatible keys a walk in the park. Suppose that the track that’s currently playing on the dancefloor is “Get Down” by Todd Terry All Stars (Kenny Dope Original Mix – I bet you can’t stand it by now!) We’ve found earlier that this track is in Cm. Let’s find this key in the inner circle of the Camelot wheel. As you can see, C minor, code 5A, is located next to F minor, G minor and E-flat major (diagonal neighbors don’t count!). Those will be the keys compatible with Cm. Of course, Cm is also compatible with itself. 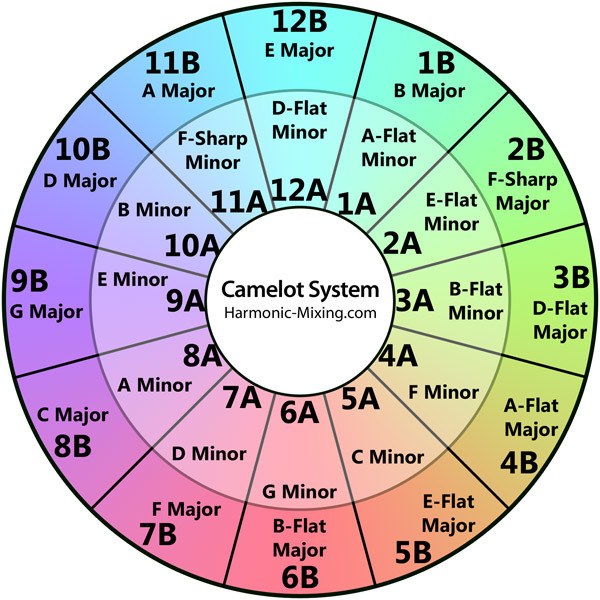 Now it gets easy: You need to choose your next track so that its key is Fm, Gm, E♭, or Cm. This practically guarantees that the two records will go together well when mixed.

Tip: When marking your records for harmonic mixing, it’s better to use Camelot numbers (1A, 2A etc.) instead of actual keys like Am or F#m. This will allow you to find compatible keys without looking at the wheel itself. Example: 11B is compatible with 10B, 12B (adjacent numbers, same letter), 11A (same number, different letter), or 11B itself.

Another tip: You can make Rapid Evolution display keys as Camelot numbers, too. Click the “options” button and in the “general” tab, set the key format to “key code.”

After you’ve tried mixing harmonically for a few times, a natural question will arise. When beatmatching, you adjust the new track’s pitch to match its tempo to that of the old one. But changing the pitch also changes the key of the track (duh!) by making its notes higher when the pitch is increased and lower when it’s decreased. Does that mean that if the tracks’ BPMs are different, then the information about their keys is useless?

Not really. First, in order to shift a record’s key by just one semitone, you need to pitch it up or down by as much as 6%. Thus if the BPMs of the tracks being mixed are not too far off (say, 1-2%), the songs will still go well together provided their keys are compatible.

Second, a lot of today’s CD and even vinyl decks have the Master Tempo feature, which uses digital signal processing to keep the track’s original key intact no matter where you move the pitch. This feature is a godsend for anyone wishing to mix harmonically, but be careful to not overdo it: Master Tempo distorts the sound if you pitch the track too far away from 0%.

To Top It Off: Energy Boost Mixing

When the tracks being mixed are in compatible keys, you can make very long transitions without having to worry about key clashes. There’s yet another secret weapon in the arsenal of harmonic mixing, however, and that’s energy boost mixing.

In this approach, you forget about compatible keys and pick the next song so its key is one or two semitones above the current one. For example, if the currently playing track is Martin Solveig – Rejection (Ian Carey Mix), which is in E♭m, then the next one should be in either Em or Fm. A key change like this is very dramatic and gives an energy lift to the dancefloor.

In Camelot numbers, energy boost mixing translates into adding 7 or 2 to your current Camelot number to go 1 or 2 semitones higher, respectively. In the example above, E-flat minor is 2A, which means that the next track has to be either 9A or 4A.

As opposed to “classic” harmonic mixing, energy boost mixing isn’t so favorable for long blends because the records’ keys are incompatible. Use the EQs to cut out conflicting melody elements and avoid key clashes during energy boost transitions.

One final thought before I conclude this series on harmonic mixing: Everything is good in moderation. Picking the next record based only on its key can be very limiting. Rules are meant to be broken; don’t let them prevent you from dropping that “bomb” that the crowd wants to hear here and now. Let harmonic mixing be just another tool in your DJ skill set, and not a pair of handcuffs limiting your creative freedom.