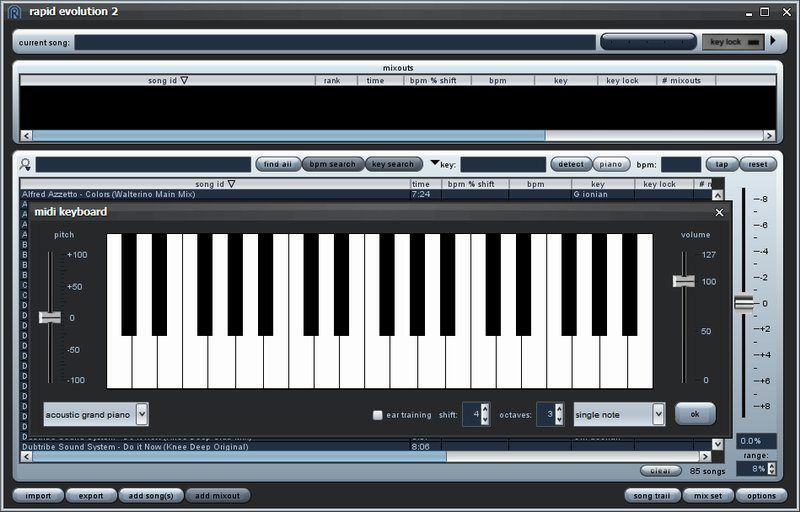 How to Find the Key of a Song by Ear

In order to build your set according to the principles of harmonic mixing, you’ll need to know the keys of your tracks in advance. There are three ways to find the key of a tune: by ear, with software, or using special song key databases in the Internet. I’ll start off with finding the key by ear, and for a reason.

The thing is, you may be using a calculator for whatever math you may need to do, but it still helps to know your arithmetic. Same story with being able to find the track’s key.  Sure, there’s clever software that does it automatically, and you can often look up the track’s key on special websites. Still, the software is not always 100% correct, and online databases don’t list all tracks that have ever been released. Thus you need to have at least a vague idea of how to find the key by yourself.

To find the key by ear, you’ll need a piano, a synth or a software emulator of a piano keyboard. Getting a bit ahead of myself, I suggest that you install Rapid Evolution: this free program’s virtual keyboard can build chords automatically, which will make finding the key much easier for a newbie. 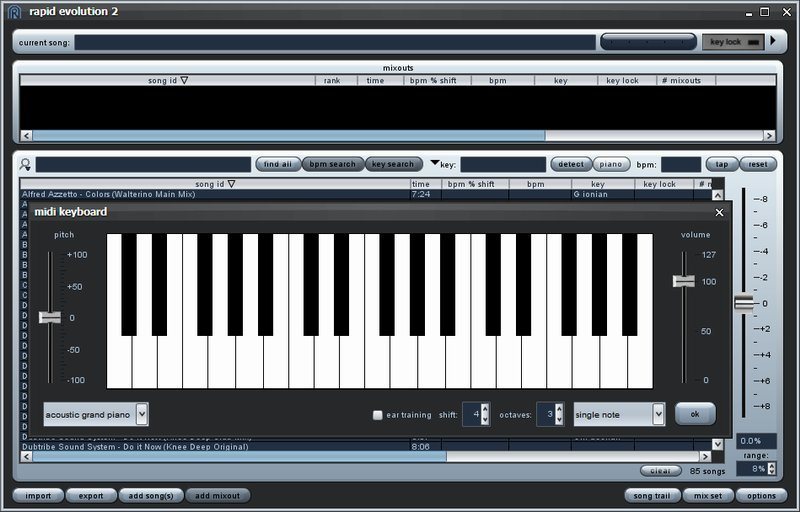 Virtual keyboard in RE 2

After you’ve installed and launched Rapid Evolution, click the “piano” button. A virtual keyboard will pop up (see picture). On your turntable or CD player, start the record whose key you want to find. Important: the pitch has to be at dead zero!

Your goal is to find a key on the keyboard that fits in with the melody the best. Make sure that the dropdown box to the left of the OK button says “single note” and then start going over an octave’s keys starting with C (it doesn’t matter which octave you’re in). Sooner or later, you’ll find that one note that fits in with the track better than any other one – no matter where the melody is heading. This note, which stands out the least, almost disappearing into the melody’s background, is most probably the tonic.

After you’ve made certain that you’re dealing with the track key’s main note, all that’s left to be done is to determine whether it’s major or minor. In the already familiar dropdown box, choose “major” instead of “single note” and play the tonic key on the keyboard. See if this major chord goes well together with the melody. Next, try the minor one by choosing “minor” and playing the main note again. You can tell the key’s scale based on which chord matched the song’s melody the best.

Tip: The majority of today’s dance records are in minor keys. Some folks say that it’s because of the wider range of emotions that the minor scale is able to convey. Others insist that this has to do with the music of black American slaves, where sad melodies were prevalent and to which electronic music can trace its roots. That way or another, this observation is worth making a note of!

Example 1. Let’s try to find the key of “Get Down” by Todd Terry’s All Stars, which you’ve already heard in the article about track structure:

Start the track, fast forward to where the melody begins and start playing the notes – C, C#, D, D# and so on. We’re lucky right from the start: C fits in with the melody perfectly. Moving on, we find that G doesn’t clash with the track either. If C is the tonic, then its dominant and subdominant – G and F, respectively – should go well with the track, too. We already know that G does but we skipped F; let’s try it again. Yep, F also fits in well with the song. Got to pay more attention!

So, C is most probably the tonic and thus the key is either C major or C minor. A major chord built from C clashes with the track badly, whereas the minor one fits in beautifully. This means that the key of “Get Down” is C minor, or Cm.

Example 2. Our next guinea pig is “Rejection” by Martin Solveig (Radio Edit):

Just for a change, let’s start playing the notes from F. Moving up, we notice that A♭ and B♭ fit in with the track quite well; it’s interesting because they could be the subdominant and the dominant, respectively (as they’re exactly 2 semitones apart). If that’s the case, then the tonic must be E♭ because it’s 7 halftones lower than B♭. Indeed, E♭ goes with the tune beautifully and sounds in place in any part of the song.

Now let’s see if the key is E-flat minor or E-flat major. A major chord built from E♭ sounds clearly out of tune with the song, whereas the minor one is just what the doctor ordered. Thus the key of the track is E♭m, or E-flat minor.

By the way, since the E♭ key on the keyboard can also be referred to as D#, E♭m can be referred to as D#m, or D# minor (very technically, those two keys are different, but let’s leave those technicalities to music theorists). Always keep this duality in mind, especially when trying to locate a key on the Camelot wheel – more on that later.

All right, are you still up for mastering harmonic mixing? Don’t worry, it gets easier. In the next article, I’ll tell you about the software you can use to find the key of a song, as well as the online databases where you can simply look it up. We’re moving on!

Next up: The Lazy DJ’s Guide to Keying Tracks