When it comes to automatic track key detection, two pieces of software immediately come to mind. The first one is Mixed In Key, which gained a lot of publicity in the DJ community due to clever marketing. At the time of this writing, you could buy a copy of this program, which is endorsed by Pete Tong and other DJ superstars, for $58.

The second product, vastly overshadowed by Mixed In Key but by no means inferior to it, is Rapid Evolution, which we’ve already gotten a chance to play with. It’s arguably more feature-packed than MIK, and on top of it, it’s free. 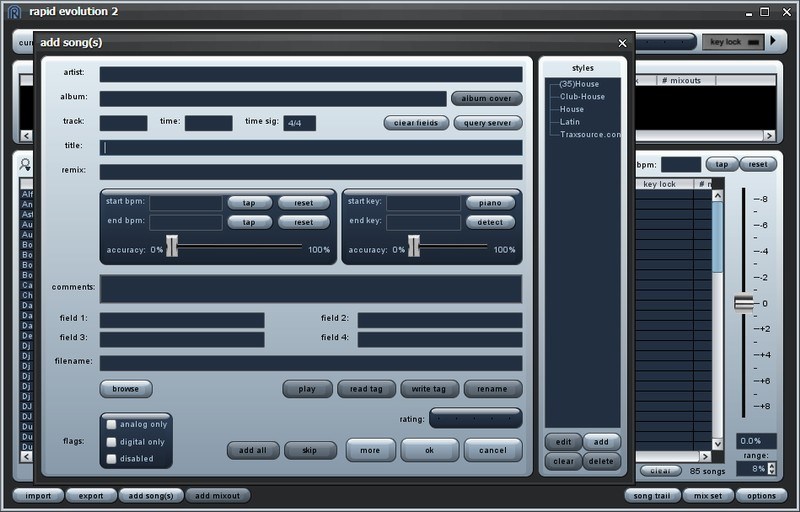 Detecting tracks’ keys with Rapid Evolution is very easy. First, you need to add the tracks to the program’s library. (This assumes that you store your tracks in digital form, i.e. as files on your computer. Read below if you don’t.) To do this, click the “add songs” button in the program’s main window. In the dialog that pops up (see picture), click “browse” and choose a track or a folder on your computer. Click “add all” to add all tracks in a folder to the library.

In the program’s main window, select the tracks whose keys you want to detect. Right-click on the selected tracks and choose “detect” and then “key” from the menu to start the key detection process. Be patient as it may take a while. In the end, Rapid Evolution will display the tracks’ keys in the “key” column next to their names. 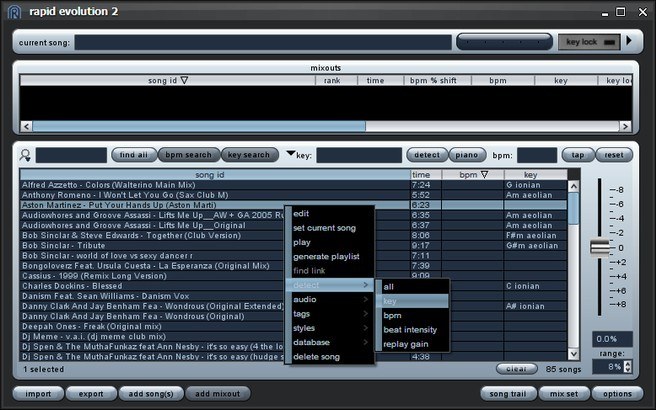 Detecting a track’s key with RE 2

By the way, in addition to keying digital music files, RE is capable of analyzing the live signal that comes to your sound card’s Line In input! This comes extremely handy if you want to find the keys of the tracks in your vinyl or CD collection.

Mixed In Key and Rapid Evolution are not the only game in town as far as automatic key detection goes. A few DJ software packages, notably Virtual DJ and MixMeister Fusion, come equipped with this feature.

Here’s how to find the key of a track in Virtual DJ. First, right-click on the header of the track browser table and check “Key” in the right-click menu to make the “Key” column appear.

Next, like in Rapid Evolution, select the tracks in the browser, right-click on them and choose “Scan for BPMs”. Don’t let the menu item title fool you: along with the BPMs, you’ll get the tracks’ keys, too. Those will be displayed in the “Key” column.

Keying a track in Virtual DJ

A few words on the accuracy of automatic key detection. I haven’t tried Mixed In Key; as far as Rapid Evolution goes, it seems pretty reliable, although not in 100% of the cases. RE’s creators claim that the program’s error rate is about 29-33%, which is not too bad. That said, even with the detection accuracy set to highest, RE was stubbornly claiming that “Rejection” by Martin Solveig (Radio Edit) is in D# instead of D#m.

As far as Virtual DJ goes, its detection accuracy looked acceptable in the few tests that I’ve run.

By the way, you may want to only use one piece of software to key your music collection. The thing is, even if a program is inaccurate from time to time, the keys detected by it as compatible (more on that in the next article) will often turn out to be such in reality.

MixShare. This website, which is also home to Rapid Evolution, boasts “the largest collection of song key and BPM information in the world” with more than 500,000 entries. The database is populated by the community, and given that a lot of its members use Rapid Evolution to key their tracks, it can’t be 100% accurate.

You should be able to access the MixShare database online, although at the time of this writing, the database was undergoing “improvements and relocation” and wasn’t accessible. You can also query the database from within Rapid Evolution, but I haven’t been able to make it work reliably.

Track-Finder.com. These guys have run over 400,000 dance tracks through Mixed In Key and posted the results online. Despite the “growin daily” promise though, I haven’t seen any meaningful increase in the number of entries since 2009, so you probably won’t find newer tunes there.

Camelot Sound. Mark Davis, the creator of the Camelot wheel (which we’ll study extensively in the next article), sells access to an online database of key results detected by professional musicians. The database includes over 55,000 songs and is claimed to cover most club hits from the past and present. There’s also an offline version available.

I suspect that you’re dreaming of harmonic mixing every night by now. We only need to take one final step, though. It deals with translating the quantity into quality, or the knowledge of your tracks’ keys into the ability to create truly harmonic mixes. That’s what I’ll be talking about in the last article of the series.

Next up: How to Mix Harmonically